Welcome back to this second edition in “Season 2” of the Flashbots Transparency Reports.
These reports aim to cover the recent developments, research, discussions and events related to Flashbots. This edition will focus on the adoption of MEV-Boost, highlights from Devcon VI and the introduction of SUAVE.

It’s been 8 weeks since the Merge and the adoption of MEV-Boost continues at a remarkable rate. As of publishing this report 88% of Ethereum blocks in the last 24 hours were relayed through MEV-Boost, earning these validators on average almost 300% more in block rewards. 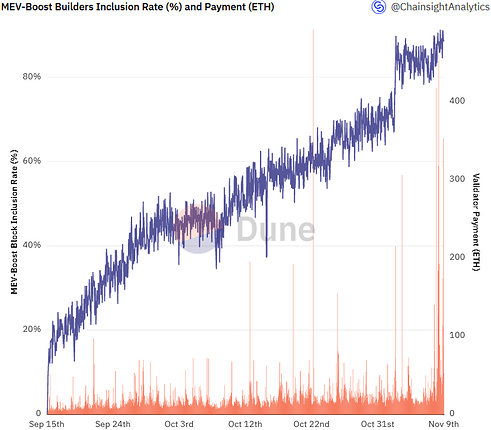 The volatility of proposer payments continues to be high with some exceptional outliers. However, even when comparing the median block rewards, MEV-Boost blocks consistently outperform locally built blocks by over 100%. 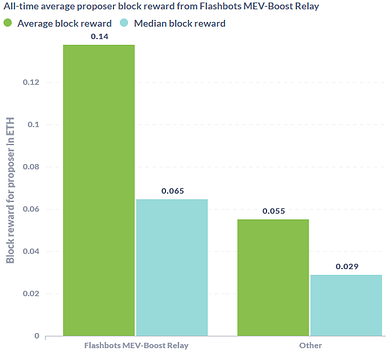 
On November 1st, Coinbase Cloud announced that MEV-Boost would be available as an opt-in MEV solution for their ETH staking customers. The following day, the Flashbots Relay hit a new ATH for the highest number of validators registered in a given day, beating out the day of the Merge by a few hundred registrations. Over 55,000 new validators registered on November 2nd which is over 10% of the total validator set on Ethereum!


In under 2 months MEV-Boost has reached almost 90% adoption by block proposers, a process that took mev-geth over a year to achieve. Democratizing access to MEV by allowing solo validators to participate on equal footing as sophisticated staking providers is essential to ensure a decentralized validator set on Ethereum.

A new relay began its operation in October, bringing the number of active relayers up to 8. Relayooor, maintained by builder0x69, is the first non-Flashbots relay that’s permissionless, allowing any builder to submit bids.

The Flashbots Relay continues to dominate with 85% of all validators having added the relay to their MEV-Boost configuration. A month ago, the Flashbots Relay had proposed 84% of all MEV-Boost blocks since the Merge, today that number is at 80%. This looks to be the start of a trend in relay diversification and we encourage more permissionless relayers to come online and attract adoption from both builders and validators!

70% of all new blocks proposed on Ethereum are currently sourced from relayers that do not include transactions interacting with OFAC sanctioned addresses. Post-merge less than 1% of blocks have contained one, or more, of these transactions. These blacklisted transactions will on average now need to wait 2 additional blocks before being included. 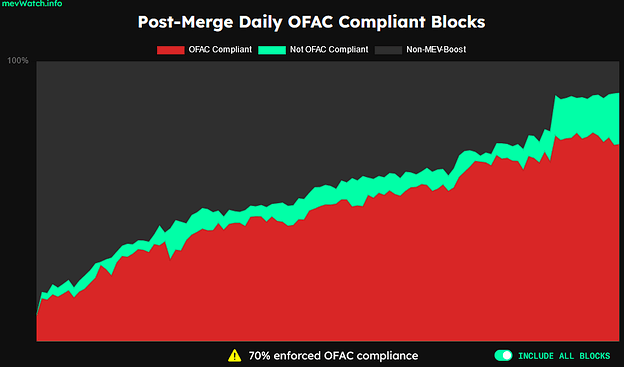 This censorship does not occur on the consensus layer, as relaying blocks is performed off-protocol, but it’s still concerning and needs to be addressed. The adoption of MEV-Boost outpaced our effort in building the competitive ecosystems we’re striving towards and we need to find ways to combat this growing issue. Below is a list of conversations surfacing different areas on the topic and some potential solutions to diversify the relay market and increase the capability of validators:

A series of updates has been made to the Flashbots Relay during the last month:

v0.11.0
This release introduced block builder submission cancellations. Previously only a higher value payload could override the previous one. With this change, the latest payload sent by the builder will always be used.

For any given slot, the Flashbots relay receives about 450 payloads from 30 different builders, the block submission rate limit is now set to 2 submissions / second / IP address.

The v0.11.0 release also added two often requested fields to the Data API that will allow for a greater variety of community explorations and visualizations:

Bundle cancellations
Bundle cancellation and replacement are being tested on our mainnet staging env via the new optional userUuid-field. The bundle is considered canceled once either the eth_sendBundle or eth_cancelBundle returns 200.

Data-API
The previous limit of 200-entries when querying the Flashbots Relay Data API for builder submissions for a specific slot or block_number has been removed. If you’ve previously saved/indexed all bids, you may have incomplete information and should reindex (starting with the full bulk data download mentioned above).

The builder role will, in contrast to relayers, continue to exist with in-protocol PBS and it’s important that we continue to research potential ways to decentralize the market of block building. Flashbots is devoted to fight all forms of centralization as a result of the negative externalities of MEV and we are committed to building systems that avoid entrenching actors at every step and strengthen the base layer neutrality of Ethereum.

MEV-Boost v1.4.0 has been released! This update includes a number of improvements, for example;

@metachris shared additional ideas for the next milestones of MEV-Boost:

The systemic importance of MEV-Boost on Ethereum makes it necessary to be thoughtful about how ongoing research and development should be organized. Help us navigate this path towards an open, collaborative, and effective R&D process for MEV-Boost by joining the conversation:

For additional information on what’s happening in and around MEV-Boost, see: MEV-Boost Status Update - 2022-11-03.

During the Devcon presentation by @phil, MEV for the Next Billion: It’s Time to Get Serious, the next generation of Flashbots codenamed SUAVE (Single Unifying Auction for Value Expression) was introduced. SUAVE has been in development for a year and we’re excited to start releasing and building it out iteratively together with the community.

SUAVE is the start of a new cooperative phase of MEV which aims to decentralize the monolithic builder role and combat the centralizing forces of exclusive order flows. It is an Ethereum native, mev-aware and privacy-first encrypted mempool which protects against the entrenchment of any actor and eliminates any central points of control, including Flashbots. 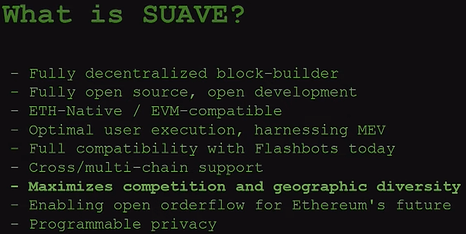 743×374 205 KB
Keep an eye on the forum as more information on SUAVE will be published and join us in building this decentralized future together!

The dream of redistributing the extracted value by @chayoterabit invites to a conversation on the possibilities of MEV redistribution. Redistribution of MEV is one of the goals Flashbots set out to achieve two years ago. Our first two goals, illuminate and democratize, have so far taken priority and it’s now time we collectively start building systems to distribute the benefits of MEV back to the community. The post explores redistribution across five dimensions:

To burn or not? by @Hasu is a response to a post published by domothy titled Burning MEV through block proposer auctions. The original post introduce the idea of a committee of proposers competing for upcoming slots where the winner is determined by whoever is willing to burn the most ETH. The goals of the mechanism would be to smooth validator rewards and distribute MEV to ETH holders.

The reply by Hasu argues that the economic security of Ethereum is derived from validator payments. By burning the rewards a tragedy of the commons game would be introduced which would lead to an erosion of economic security as well as validator centralization.

Privacy Concerns with Data API by @jtraglia starts a conversation on preserving privacy of the MEV-Boost Relay Data API for checking/verifying validator registrations. A particular point brought up is the possibility to analyze relay registrations and group validators together based on their timestamp. Another question raised is if the API should return all registered validators, or only those that are currently active.

Anyone can submit a research proposal for consideration and might become eligible for a grant!

October was a busy month in terms of public appearances with talks & panels at Devcon and workshops & roundtables during our MEV-Workshop. Listed below are information regarding the public appearances by Flashbots mates since the last report. The next chapter below provides additional content related to Flashbots, MEV and PBS from the broader community.

Flashbots hosted MEV Workshop during Devcon on October 14th as a one-day event with discussions related to searching, data, research, and product. Below is a summary of each track with links to notes and material for further reading.

Searching from Scratch
The day started out with a workshop for searchers hosted by @bhaki and @brock. Bhaki started off with a walk through of how transaction- and bundle flow works post-merge as well as an overview of MEV-Boost and what’s next on the horizon.

Brock then live-coded a backrunner performing arbitrage based on Uniswap trades with input from the audience (Backrun blueprint, Backrunner code).

MEV-Workshop Data Exploration
The data exploration workshop, hosted by @elainehu and Jonathan Levi, provided attendees with a dataset from the initial month of block building from the Flashbots MEV-Boost Relay. The workshop presented methods to discover interesting facts and trends in MEV for block builders, proposers and validators and discussed open questions arising from the MEV models post-merge. (material)

In order to stay up to date on any upcoming events feel free to subscribe to the Flashbots Collective calendar!

Below is a collection of talks, publications, dashboards and other content from the broader community in the last month related to Flashbots, MEV and PBS. Feel free to check out the list from the last report for even more amazing resources!

At Flashbots, we research and build systems around MEV, and we would love to collaborate with you. We are a distributed organization with the principles of a pirate hacker collective, and have several open positions.We also issue grants to external researchers doing work aligned with ours, please find out more in our Research repository.

Make sure to also take a look around here on our forum and join the conversation!