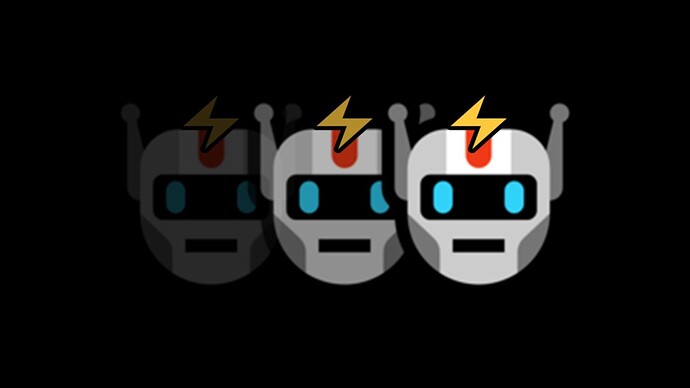 1280×720 27.4 KB
In May and June 2021 Flashbots strengthened and moved forward our network, successfully releasing v0.2 and with it improved auction pricing as well as bundle merging.

At the time of writing mining pools accounting for more than 84% of the Ethereum network hashrate have adopted Flashbots and more searchers than ever are submitting and landing bundles on-chain. More metrics on Flashbots and its stakeholders can be found on our Transparency Dashboard.

As an open research organization we stayed true to our commitment to learning from the community and iterating in public. Here are the highlights:

In early April we published our initial proposal for Flashbots Auction v0.2 to gather feedback and share our roadmap. We released v0.2 on May 24th with these features:

We ultimately decided to remove the following features:

In early June we discovered that some searchers were gaming the Flashbots auction and underpaying miners for inclusion. The heart of the bug was that MEV-Geth did not ensure that the gas price that bundles paid post-merging was the same as what we thought it was pre-merge. Since bundles are simulated alone at the head of a block, if a bundle could somehow change the amount it paid based on their position in a block then that bundle could trick MEV-Geth if it was merged in the 2nd or later bundle position.

Given that this affected both searcher and miner’s profitability we pushed a fix in release v0.2.2 to this. The fix for this issue can be found here.

As part of the update to bundle scoring in release v0.2 we started to discount the fees from transactions that had been seen in the mempool in order to prevent “bundle stuffing,” where searchers take high gas price transactions from the mempool and include them in their bundles in order to “piggyback” off of those gas prices and get some transactions accepted that otherwise wouldn’t have been.

Our implementation of this discounting did fix bundle stuffing, but it also wrongly penalized a class of searchers who submit both transactions in the regular mempool and Flashbots transactions at the same time. Essentially we wrongly discounted coinbase payments from these transactions, which meant they landed in Flashbots blocks much less often than they should. The fix for this issue can be found here.

Bundle merging saw strong and consistent adoption, reaching nearly ~70% of Flashbots blocks having 2 or more bundles included in them

In turn the amount of MEV that miners make per block has increased relative to normal transaction fees. The chart below shows average MEV profit divided by transaction fees, measured on a daily basis. This demonstrates that while the overall profitability of Flashbots blocks has been decreasing, that drop can be attributed to the decrease in gas prices recently and Flashbots is actually accounting for an increasing amount of miner’s revenue over time.

With the London fork around the corner, the Flashbots team has shifted focus towards adding support for EIP-1559 to MEV-Geth and Flashbots Relay. Flashbots aims to have MEV-Geth v0.3 released at the end of June to support the Goerli upgrade to EIP-1559 on block 5062605: London Testnets Announcement | Ethereum Foundation Blog

EIP-1559 has big implications for searchers and miners. Searchers will need to adapt their bots to use a new transaction format and will be required to pay the base_fee for each of their transactions. This means it is no longer possible to achieve “0 gas” transactions. We are hoping to introduce upgrades to ethereum and flashbots in the future which re-enable this behavior. On the miner’s side, EIP-1559 will have an impact on their accounting and node infrastructure. We expect EIP-1559 to further increase miner’s desire to receive value from MEV.

Flashbots Research is currently analyzing the impact of EIP-1559 on MEV and Flashbots. The preliminary results will be presented in MEV.wtf summit on Jul 1, followed by a research post.

We are starting to experiment with a reputation system to handle the load we have been receiving in periods of heavy activity — this should lead to improved relay performance for searchers with a history of successful inclusions. While we expect this change to have an immediate positive impact, it is a temporary solution and we are actively looking for feedback on how we should think about scaling the relay moving forward. See our proposal here: Proposal: Scaling the relay · Discussion #79 · flashbots/pm · GitHub

Working with our community contributor @metachris we’ve developed a series of monitoring tools that enable us to better understand implementations of Flashbots’ network, miners behaviour, and any deviations in the expected behaviour of the Flashbots blockspace auction. Specifically we have tools to monitor reverted 0 gas price transactions and when bundles are not ordered according to their effective gas price. We intend to productionize these monitoring tools and create a Discord channel that provides alerts from them.

Flashbots Alpha has been and continues to be successful, but it offers incomplete trust guarantees. In particular it is not permissionless nor is it completely private. These are extremely difficult properties to achieve. In our pursuit of these properties Flashbots has released our proposal, MEV-SGX, for using secure enclaves to provide a permissionlessness and complete privacy. Read more about the MEV-SGX here.

As The Merge approaches, we’ve begun research efforts in understanding MEV in eth2 better. Our first research post on the topic was released here, alongside a repository with some rough modeling of staking rewards with MEV. In this early exploration, we study transaction ordering in eth2 and analyze MEV-enabled staking yields. We find that MEV will significantly boost validator rewards but may reinforce inequalities within participants of eth2. We also discuss qualitative aspects of MEV in eth2 such as the potential dynamics that will unfold between its largest stakeholders like exchanges and validator pools.

This follows our joint prototyping experiment with Nethermind and Lido in ETHGlobal, Ray Tracing.

Building our early work on mev in eth2, we are looking to model further the inequalities that may be caused by MEV as well as study potential vectors of attack of eth2 related to MEV. In particular we are looking to answer: 1) to what extent does MEV in eth2 amplify its inherent rich-get-richer dynamics?, 2) how does knowing the block proposers in advance change MEV extraction dynamics?

After an initial exploration of MEV in eth2 and the Rayonism hackathon where a spec of an eth1+eth2 MEV client was built out, we dive deeper into specing out Flashbots in eth2. This includes thinking about the best flow for MEV rewards to be distributed, understanding different validator pool architectures and ensuring MEV extraction is available to validators of all sizes.

MEV will likely exist in each L2s being deployed as well as across them. This effort aims to start doing research on the topic, both on how MEV exists at these layers and the state of its mitigation via different solutions such as VDFs and fair ordering protocols.

EIP-1559 is a hotly debated upcoming EIP that is being introduced in the London Hardfork. It will significantly alter Ethereum’s fee mechanism, crucially resulting in most of the transaction fee being burned and eliminating 0 gas price transactions. We examine the effects of EIP-1559 on MEV extraction and, by extension, the Flashbots project.

We explore whether there are cryptoeconomic mechanisms that can reinforce, or substitute the relatively expensive and proprietary solution that is SGX, to achieve the same desirable result of complete pre-trade privacy. Some work already published includes thoughts shared by Vitalik Buterin in an EthResearch post for a fee market design where block proposers and block builders are separate entities.

A survey of privacy solutions that can be used to provide MEV-Geth with mempool privacy and an attempt to start formalizing the problem of mempool privacy for L1 and L2 blockchain constructions.

An investigation and survey of the existing literature of auction mechanism design to motivate the design of the block space and transaction ordering auctions enabled by mev-geth. The high-level research question is: What is a good auction mechanism for mev-geth auctions?

Join our full-day MEV.wtf summit with ETHGlobal on Thursday, Jul 1, where we will discuss the core problems of MEV, mitigations and solutions from the application-agnostic protocol level and application-specific level.

Jam with us at the ETHGlobal HackMoney hackathon (Jun 18 — Jul 9) where Flashbots is providing $8,000 in prizes](https://www.notion.so/Prizes-HackMoney-25d3310d9f6e4970a57062798b8d98de) to winning hacks built around MEV. Additionally, we are giving out $4,000 in joint prizes with Uniswap for a series of ideas built on both Uniswap and Flashbots during the hackathon. 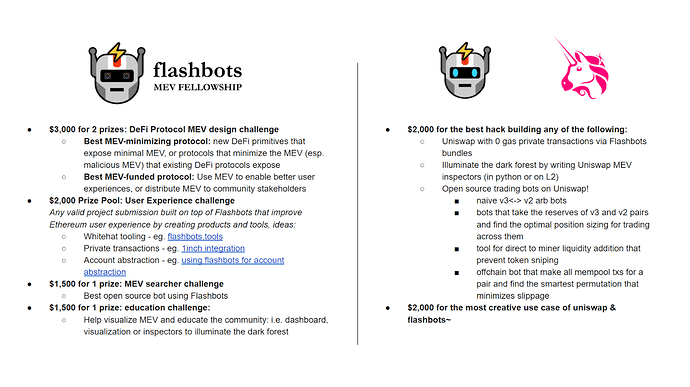 ArcherDAO has built a DEX which sends users’ Uniswap and Sushiswap transactions directly to miners as Flashbots bundles, thereby skipping the mempool where hungry sandwich bots are watching. Moreover, doing so also allows users to avoid paying for failed transactions.

Some trades through Archerswap create arbitrage opportunities, and Archer released an update to their DEX where they have started to backrun their users to capture these and kick them back to the trader. That way the trader gets better pricing and captures some amount of the MEV they create. We think this is the start of a long list of protocols which will use MEV in creative ways to offer better outcomes for their users.

What are Flashbot transactions, and how do they work on 1inch?

Use 1inch Flashbots to prevent front-running and sandwich attacks

1inch, one of the largest DEXes in Ethereum, now offers the ability for customers to send their transactions via Flashbots bundles, thus offering frontrunning protection from the monsters of the mempool.

mistX is a DEX that offers users the interesting new feature of allowing the trader to not pay a transaction fee to the miner. Instead the trader pays the miner via a smart contract call in mistX’s smart contract, and mistX will either remove some ETH from the trade or from the user’s wallet to pay this fee.

Similar to 1inch or ArcherSwap, mistX also offers frontrunning protection and no failed transactions to their users. Hasu of Paradigm published a great article on mistX here.

Flashbots had our first mention in the mainstream media! Check out this clip at 1:30 to see it for yourself.

Zeneth uses Flashbots to enable arbitrary meta transactions such that users can deposit and enter L2s without needing any ETH. It is a clever usage of the ability to sponsor transactions using Flashbots that is live now and we hope to see more usage of in the future.

At Flashbots, we research and build systems around MEV, and we would love to collaborate with you. We are a distributed organization with the principles of a pirate hacker collective, and have several open positions. We also issue grants to external researchers doing work aligned with ours, please find out more in our Research repository, or join our Discord!